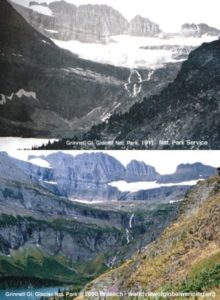 Global warming has melted much of Grinnell Glacier since 1911

Glacier National Park is famous for its mountainous landscape and glacially carved terrain. What many people don’t realize is that mountain glaciers provide more than just scenery. Glaciers are an integral part of the ecosystem, providing water to mountain and downstream environments. In today’s warming climate, these giant marvels of snow and ice are rapidly disappearing.

By providing a dependable source of cool, fresh water, glaciers are essential to the health of aquatic and riparian ecosystems. They also provide fresh drinking water for downstream populations and dilute pollutants that are generated mostly in lowland areas. As climate warms and glaciers melt, these ecosystems are losing an important source of fresh water.

Glacier National Park has already lost more than 70% of its glaciers in the last century. Today there are 25 of the 150 glaciers that were recorded in 1850, the end of the period called the Little Ice Age. At the present rate of warming, scientists predict that all of the glaciers in Glacier Park will be gone by the year 2020. The demise of glaciers will affect both the amount and timing of mountain streamflow. 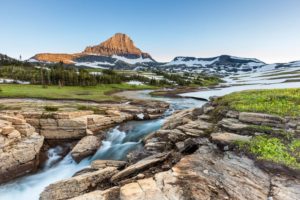 Mountain streams in Glacier National Park are fed by alpine glaciers and snowpack. In summer, once it becomes warm enough to melt the snowpack, a rush of water comes down the mountains from glaciers to join the streams and rivers. Then, for the rest of the warm season, mountain streams are augmented by a constant flow from melting glaciers. When rain is sparse, as in the late summer and during drought years, mountain glaciers may be the only source of base flow in some mountain streams.

As climate warms, this pattern is changing. With a warming climate, less winter precipitation falls as snow but more of it falls as rain. Also, spring comes earlier. The longer warm season will allow even more snow and ice to melt. Earlier, warmer summers mean spring runoff from mountains happens earlier in the year, and often in a bigger rush of water downstream. In the Pacific Northwest region, spring runoff is now happening up to two weeks earlier than it used to. A concern with global warming is the possibility of more spring floods due to the pulses of rain combined with melting snow and ice.

As mountain glaciers melt and spring runoff happens earlier, there is less water later in the season. For many small mountain streams, melting glaciers provide the only source of base flow in late summer. With no glacial meltwater to augment them, some streams may become ephemeral, drying up late in the season. This will have major consequences for stream ecology.

In addition to regulating stream flow, glacial meltwater affects the temperature of mountain streams and rivers. Many of the invertebrates that live in Glacier National Park’s waters are very temperature sensitive and can only live within a narrow temperature range. Because aquatic invertebrates are at the base of the food chain, putting them at risk threatens the entire stream ecosystem.

Links for further information:
The potential impacts of climate change on native aquatic ecosystems of the northern Rocky Mountains:
http://www.nrmsc.usgs.gov/research/climate_fish