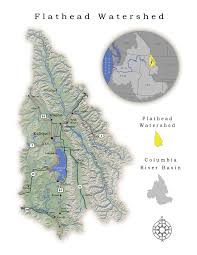 After the spring equinox on March 20th, the days get longer and allow the earth in the northern hemisphere to absorb heat. The sun shines down on the peaks that rim our valley, defining the boundaries of the Flathead basin watershed. The snow which has accumulated in the watershed during the winter begins to melt and soak in. The ground becomes saturated and water flows off, drawn ever downward into our many creeks and rivers, to collect in Flathead Lake. The past journeys are reflected in the landscape of our valley, shaped through floods and shifting stream channels. 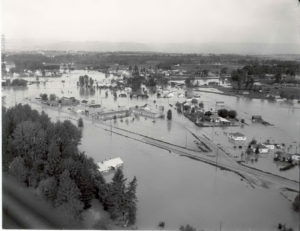 The weather in the spring has a great influence on this journey. In warm years, the snow melts rapidly and the rivers become full to overflowing. The waters rush across the floodplains, eroding unstable stream banks and carrying the muddy debris downstream. A warm rain falling on the snow can cause rapid melting and result in large scale flooding, such as happened here in 1964. Dramatic changes may be the result.

If the river is carrying too much sediment, it may divide into several channels separated by islands of deposited debris. Large islands may become vegetated and provide important wildlife habitat. This braided pattern is typical of the Flathead River in the upper valley. 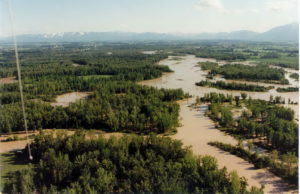 It may abandon some channels, only to take them up again a few years later, or create new channels. The river channel may shorten its path by cutting off a big bend and creating a “slough” or oxbow lake. There are many examples of this in the lower Flathead valley. Over time, the river moves back and forth across its valley.

Changing climate adds another dimension to the local pattern. Over the last two decades the average March temperature has increased almost 6 degrees F. This means spring thaw happens earlier, causing the runoff to peak earlier in the year. Summer temperatures are increasing too. By August, there is less and less snowpack left in the mountains to sustain rivers during hot dry times. Glaciers and snowfields in the mountains are disappearing year by year. These changes will also be reflected in our ever changing landscape.

Learn more about the power of water at Flood Awareness Day, May 1, 2008.
Join in collecting important climate change data on the timing of leafing and flowering in your area through Project BudBurst! http://www.windows.ucar.edu/citizen_science/budburst/