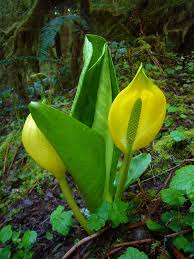 The cold of winter is melting away, with the warming arrival of spring. As day length changes and temperatures slowly increase – a wake-up (and welcome back) call goes out to many inhabitants in northwest Montana.

One of the earliest plants of the season has already made its appearance in the wetlands of the valleys – western skunk cabbage. The flower has a pungent, skunk-like odor, which evolved to attract pollinators, like flies and beetles that feed on decaying, smelly organic matter. In the higher elevations, we’ll soon be seeing the glacier or avalanche lily. By expending some of its large reserve of stored carbohydrates, this plant can generate enough heat to melt its way through the last few inches of snow! 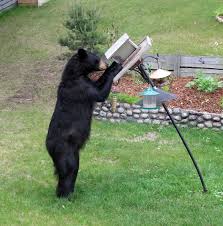 Grizzly and black bears begin to emerge from their winter dens. The males and poorly conditioned bears typically emerge first, then sows with cubs, later. They begin seeking large quantities of water, eating snow if water is not available, and also roots and herbs to help clear their kidney and digestive systems. They are also on the look-out for winter-kill carcasses and other high protein foods. A good time to remember to put away your bird feeders, suet and garbage cans, so they are not attracted to your back yard!

Welcome back to many members of the bird community. Some are returning to the local forests, lakes, rivers and wetlands to breed, and others are just passing or migrating through. Their territorial songs are a symphony in early morning and evenings.

Ospreys or “fish hawks” have returned from their wintering areas, flying in from the Gulf of California (also known as the Sea of Cortez). Many successfully return to nesting platforms and trees near rivers and lakes, adding sticks, cow dung, sod and the like to their perennial nests. Returning from Mexico, Wood warblers, such as the yellow and Townsend’s, will soon be singing high in the tree-tops. There is also a myriad of ducks, from northern pintails and redheads, to mergansers and buffleheads on the now un-frozen lakes. 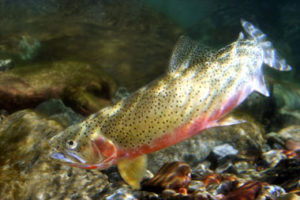 Rivers are running high, as the warmer days begin to melt the mountain snow. Fish, such as the Westslope cutthroat trout, designated a Fish of Special Concern in Montana, begin to spawn April or May through July, depending on water temperature. Others, such as the mountain whitefish and kokanee salmon begin to hatch from their eggs as early as February and March. The kokanee is the landlocked version of the sockeye salmon. Kokanee were first introduced into Montana in Flathead Lake in 1914 and are currently fairly widespread in the western half of the state.

It is a time to get out the boat, canoe, kayak; fishing rods and binoculars; saddles and bicycles; cameras and backpacks. A time to get out and experience this wonderful and lively time of year. To keep track of this fascinating performance of nature –try keeping a daily journal. Notice what is coming into the valley, the mountains and your yard, for use now and to compare to future years. Enjoy!