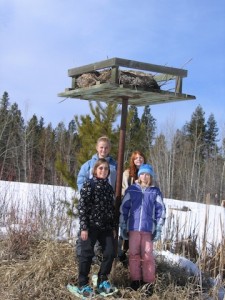 Barber Creek Pit more commonly called Barber Pit, a ten acre piece of United States Forest Service (USFS) land in Section 32, has served the Swan Valley in many capacities over the years. Besides the obvious use as wildlife habitat, it has been a Montana Department of Transportation gravel pit, a dumping area for deer carcasses and a Saturday night party site. As the gravel pit filled with water and deer carcass disposal became less frequent, the idea of restoring the area for wildlife became increasing popular among Flathead National Forest personnel working in the Valley.

After the required review and letters of support, first restorative events began in 1998 with the removal of highway debris including old bridge components, guardrails, discarded chunks of asphalt and large tree stumps. Since that year, as funding and time have permitted, weeds have been removed, tree saplings and native grasses have been planted, a goose nesting stand and a bat house have been constructed and much more debris has been removed.

In the fall of 2006, another component of the Barber Pit restoration program began. Swan Valley School’s 7/8 graders were invited to become users and caretakers of Barber Pit. With the initiation of this aspect of the pit’s new role in the Valley, another goal, that of outdoor education site, was realized. Each month during the last two school years the 7/8 graders have visited the site. During their hour and a half visit they survey vegetation, tracks and pond life, journal the weather conditions and wildlife sightings, seed native grasses and maintain a short student-created nature trail. There are still quite a few asphalt chunks to pick up as well. 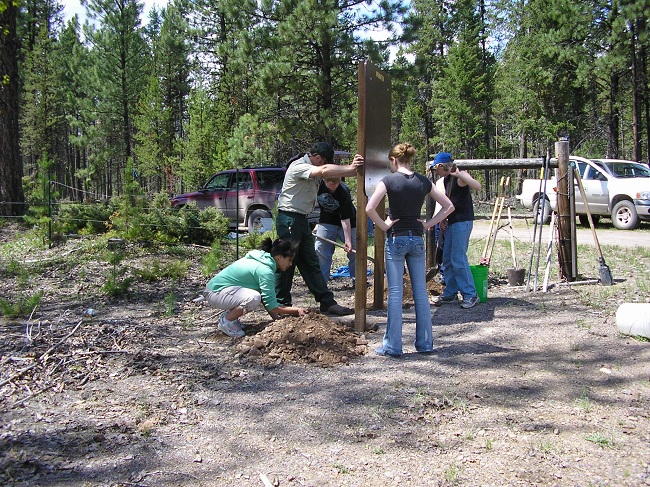 The post holes are dug and the sign is in its new home. Caretakers include Olivia Kennedy, Andrew Johnson and Summit Parcell in the foreground with Luke Townsend, Jacob Casebolt, Chase Hulett and Jordan Everson in the background.

On May 25, 2008, ten years after the original plans were developed and work began, USFS personnel, members of the Swan Valley School staff and the 7/8 grade students, and Swan Ecosystem Center’s education coordinator and volunteers gathered at the pit for what would be the final visit of the 2007-2008 school year. Along with the monthly data collection, the fence mending, macro-invertebrate and herpetology inventory, and the end of the year picnic, a sign was installed. The text of the Forest Service sign written by Summit Parcell, Swan Valley School eighth grade class of 2008, explains the purpose and partnership between the students and the agency. For the past two years and for many years into the future, 7/8 grade Swan Valley School students will be assistant caretakers of this piece of public land. Not only will students collect weather data and conduct plant and animal inventories, and maintain the grounds and fences, they will come here once a month to cross country ski, snowshoe and observe this area as it returns more closely to its original state, perhaps wetter, as the pit is only about fifty years old. 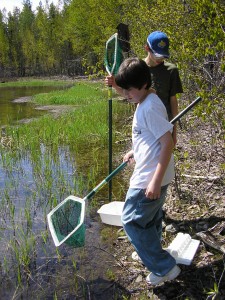 Many people have been instrumental in making this project a reality. The originators of the project were primarily Flathead National Forest hydrologist Liz Hill and foresters Bill Stine, and Don Hauth. The Swan Valley School Board, teachers Sue Patrick, Erika Pittman and Sue Bracha and Swan Ecosystem Center volunteers Larry Dunham, Mary Fitzsimon, Mary Lou Wilhelm, Neil Meyer, Dixie Meyer and Jeff Brown have facilitated the monthly visits to the site. But, especially we thank the 7/8 grade students from 2006-07 and 2007-08 many of whom can be seen in the photos accompanying this article. 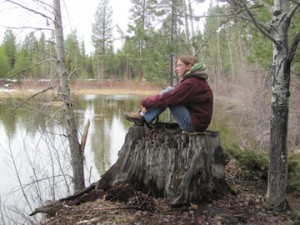