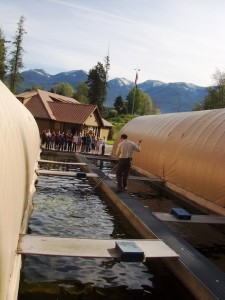 The site for the Glacier Park National Fish Hatchery was selected in 1935 by officials of the National Park Service (NPS). In December of 1935 an option was taken on the Jessup Mill Property by interested friends of the NPS. Legislation authorizing the purchase was initiated in Congress on September 26, 1936 and the property deed was transferred to the NPS on January 17, 1939. Also in 1939, Congress passed a law making the hatchery part of Glacier National Park, and ground breaking for construction was begun with a labor work force supplied by the Works Progress Administration.

Hatchery construction was completed in 1940. During the first year of operation approximately 900,000 eggs from three species of trout (brook, rainbow, and cutthroat) were received and hatched. In 1941, the first group of fish reared at the hatchery was stocked into Glacier NP waters. In 1944 a bill passed Congress transferring ownership of the hatchery from the NPS to the U.S. Fish & Wildlife Service, the law also eliminated the hatchery from Park holdings. In 1955 the name of the hatchery was changed to the Creston, Montana Fish Cultural Station.

Over the course of a half-century the hatchery program has moved through several eras of change. In the early years the primary program was cutthroat trout to stock the waters of Glacier NP, a practice that was gradually reduced until 1971 when the stocking of Glacier NP waters ceased. By 1972 the fish stocking emphasis changed to the stocking of fish onto Montana’s seven Indian Reservations. In 1993 another era was ushered in with the beginning of mitigation stocking for Hungry Horse Dam, including the rearing of kokanee salmon for Flathead Lake and the start of an experimental bull trout broodstock. Currently the hatchery rears cutthroat and rainbow trout for mitigation and tribal stockings and annually distributes around 850,000 fish into Montana waters.

Please join us this year as Creston celebrates 70 years of fish production and increased recreational fishing opportunities for the people of Montana. The Creston NFH is pleased to be able to work in partnership with Flathead CORE to increase awareness and understanding about the natural, historical and cultural resources of this special place we call home, the beautiful Flathead Valley.